Picasso at the Lapin Agile

Picasso at the Lapin Agile Review 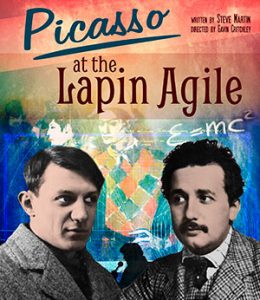 It’s wonderful to see new theatre companies opening up on the Central Coast, each bringing fresh ideas and their own unique approach to the theatrical arts. The newly formed Gosford Theatre Company has made an auspicious start with their first production, which opened in the Don Craig Room at Laycock Street Theatre last weekend. Their stated intention is to “present diverse and accessible theatre with a focus on new, challenging ideas and showcasing the Central Coast’s finest emerging talent.” True to their word, they have opened with a play that is a little outside the box. Picasso at the Lapin Agile is a quirky, original and very funny play from the pen of comic genius, Steve Martin. Martin is probably best known to the general public for his celebrated film career, but he began as a stand-up comedian and is also a writer, producer and musician. His multitude of talents have earned him many awards including Emmy, Grammy and American Comedy awards, an Honorary Academy Award and, in 2000, the Academy’s Lifetime Achievement Award in Comedy. His writing credits include the screenplays for such hit movies as Three Amigos, L A Story, Roxanne and The Pink Panther 2, to name just a few, and his stage plays include The Underpants, which was performed locally by Woy Woy Little Theatre in 2011.

Picasso at the Lapin Agile was his first full-length play and was first read in 1993 at his home in California with Tom Hanks playing the title role. It then previewed in Melbourne, Australia, and enjoyed a sell-out season in Sydney before going on to successful runs back in California, Chicago, New York and other US cities. The action takes place in The Lapin Agile, a Parisian café bar which, in its 150 years of patronage, is reputed to have played host to some of Europe’s greatest artists and thinkers. The play imagines a meeting taking place in 1904 between the young Pablo Picasso and Albert Einstein when both men are on the verge of work that will alter the course of art and science: Einstein would publish his special theory of relativity in 1905 and Picasso would paint “Les Demoiselles d’Avignon” in 1907. The humour of the play derives from the interactions between these two very different personalities and the bar owners and other patrons who witness and contribute to their lively debate about art, science and the creative process. All sense they are a part of history in the making and try to anticipate the trends that will shape the twentieth century while they each unconsciously prefigure them. For example, an eccentric inventor who visits the bar represents the spirit of commercialism, while a shrewd and self-possessed young woman named Germaine may be a nod toward the rise of feminism. Picasso and Einstein, of course, respectively represent art and science, and there is even a surprise visitor toward the end of the final act who embodies the impact of Rock ‘n Roll. As is fitting of a play that flirts with the subjects of Relativity and Cubism, the plot plays fast and loose with time, space, audience expectations and even the fourth wall. The characters are diverse, well defined and highly entertaining, and the dialogue is smart, witty, surprising and laugh-out-loud funny from start to finish. But as always with Steve Martin, under the zany humour there is a hint of serious intent and this is present in the future events that none of the characters anticipate, and is hauntingly acknowledged in the play’s sharply pointed final word.

This production is brought to us by award winning local director and co-founder of GTC, Gavin Critchley, who has many years of experience in theatre, film and television. He has wisely chosen to keep the set simple and suggestive, thus allowing the audience to remain focused on the great dialogue and the performances of his cast, which are all excellent. True to the company mission statement, Gavin has cast two highly promising young actors in the lead roles. Although Jackson Lusted has years of youthful experience with theatre he is making his debut in an adult production. Nevertheless, he has mature poise and stage presence in the role of Picasso and holds court beautifully as the flamboyant and egotistical womanizer. His perfect foil is Luke Kaalim who made his stage debut in WWLT’s 2015 production of Hay Fever and recently appeared in the 2016 Flash festival. He is endearing and bashfully charming with just a hint of Big Bang Theory’s Johnny Palecki in his interpretation of the young Einstein. They receive great support from the rest of the cast, most of whom have been familiar faces in Central Coast theatre for many years, while others are new to me, but between them they boast years of theatrical experience with an impressive array of professional credits and award winning performances. All of them make a strong impression, giving great comic performances in their varied roles, making this a solid ensemble production, and I very much hope to see more of the newcomers in future shows.

The use of technicals was effective without being intrusive, and the live musical interludes were a nice directorial touch that immediately evoked the atmosphere of the Parisian setting and time. All in all, I thoroughly enjoyed GTC’s inaugural production and I look forward with eager anticipation to seeing what they’ll offer us next.